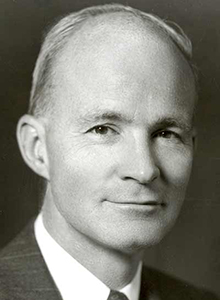 Alfred Hayes was named president of the Federal Reserve Bank of New York and vice chairman of the Federal Open Market Committee on August 1, 1956, at the age of forty-six. He came to the Bank from the New York Trust Company, where he had been vice president in charge of the foreign division.

Hayes was born in 1910 and is a native of Ithaca, New York. He spent his freshman year at Harvard and then transferred to Yale, where he earned a bachelor's degree in chemistry. Following a year at the Harvard Graduate School of Business Administration, he received a Rhodes scholarship and spent two years at New College, Oxford, England, studying economics.

Hayes began his banking career in 1933 as an analyst in the investment department of the City Bank Farmers Trust Company. Seven years later, he transferred to the bond department of the National City Bank. In 1942, he joined the New York Trust Company as an assistant secretary in the investment department. Then, for two years, Hayes served as a naval lieutenant in financial planning for military government and in the office of the Foreign Liquidation Commissioner in Washington, DC, and Rome. He returned to the New York Trust Company in 1946, was promoted to assistant vice president, and in 1947 he was assigned to the foreign division. Between 1949 and 1956, he served as vice president in charge of the division and earned a reputation as an expert in international finance.

As president of the New York Fed, Hayes made a particular effort to meet the entire staff of the Reserve Bank. Every December, he would visit every department and wish each employee a happy holiday season. He was "greatly impressed by the warmth of spirit at the Bank" and noted that his visits with staff had shown him "why the Bank is such a fine organization." 1 He believed that the strength of the Federal Reserve System lay in the twelve semi-autonomous Reserve Banks. Throughout his tenure at the New York Fed, he defended not only the organization of the System, but championed his Reserve Bank whenever necessary.

Hayes retired from the New York Fed on August 1, 1975, and joined Morgan Stanley International Inc. as chairman in November 1975. He was named chairman emeritus in 1981.

After a long and distinguished career in finance, Hayes died in 1989. 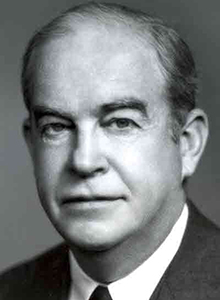