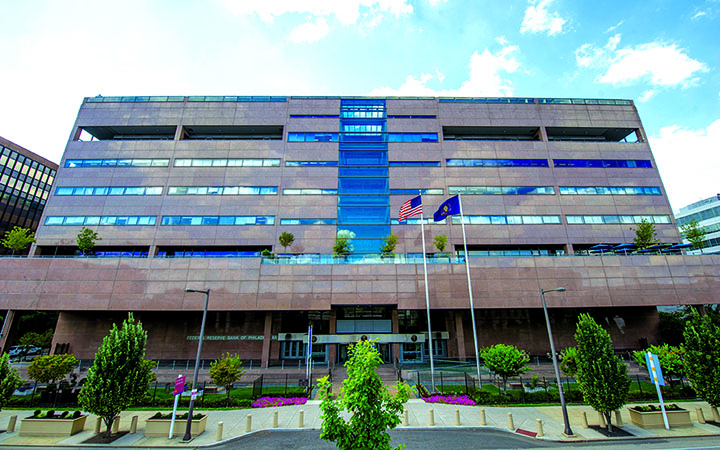 The Federal Reserve Bank of Philadelphia, commonly known as the Philadelphia Fed, serves the Third Federal Reserve District, which covers Delaware, southern New Jersey, and central and eastern Pennsylvania. Despite its small geographic size, in 1913, the Third District comprised 11 percent of the U.S. population.1 As of 2019, that number is more than 13 million people, or about 4.6 percent of the country’s population, according to the U.S. Census.2

Finding a Home for a Growing Bank

On November 16, 1914, the Federal Reserve Bank of Philadelphia opened its doors on 4th and Chestnut streets. Its four officers and 24 staff were overseen by a board of directors composed of local leaders and officials.

The onset of World War I placed increased demands on the Bank. By late 1918, the Philadelphia Fed employed more than 400 staff and officers and served more than 600 member banks. The Bank had moved several blocks over, to 925 Chestnut Street, but still needed space to expand.3 In 1932, the Bank set out to construct a new building on the site,4 designed by renowned architect Paul Cret.5 By the time of the building’s completion in 1934, the Bank’s staff had expanded again, to 12 officers and 850 employees.6

A few decades later, the Philadelphia Fed was once again in search of a larger home. The staff had outgrown the Chestnut Street headquarters, and plans for a new building started to take shape. In 1968, the Bank purchased land in an urban renewal area on Independence Mall. By 1976, construction was complete, and the Bank was fully staffed in what is now its current location at 6th and Arch streets.7

Public Art at the Federal Reserve Bank of Philadelphia

Several unique pieces of art are housed onsite at the Philadelphia Fed. As part of Philadelphia’s Percent for Art Program, three pieces were commissioned during planning and construction of the building. This program, which was first introduced in Philadelphia and has since expanded into other cities, requires developers to devote a minimum of 1 percent of construction costs to the creation of public art.8

The largest and most prominent of the Philadelphia Fed’s pieces is Alexander Calder’s White Cascade, which hangs in the building’s atrium. Measuring approximately 100 feet from top to bottom and 60 feet at its widest point and weighing close to 10 tons, the piece is considered the world’s largest mobile sculpture.9 Two other pieces, Beverly Pepper’s Phaedrus and Jill Sablonsky’s Balance, are located outside.

The same year the Federal Reserve System was established, World War I broke out in Europe. The Fed played a large role in the war financing effort, primarily through “Liberty Loans.” The U.S. Treasury issued the securities, and the Federal Reserve and its member banks conducted the sales of these Liberty Bonds,10 a key activity of the Philadelphia Fed in its early days.

One of the Federal Reserve’s main responsibilities is keeping enough cash and coin in circulation to meet public demand. Each Reserve Bank maintains cash and coin processing operations that accept deposits and distribute cash and coin to depository institutions within its region.11

Before modern computers and high-speed processing, employees in the Philadelphia Fed’s Cash Services Department examined and sorted paper money by hand into tall compartments. When a machine alerted them that they’d reached 100 banknotes, employees would separate the pile with a wooden block.12 Today, a high-speed system allows Cash Services employees to process approximately 100,000 banknotes per hour.13

The Fed helps to ensure a strong banking and financial system through its oversight of banks. At one time, bank examiners visited banks to physically count cash stored in vaults and reconcile transactions in ledgers, activities now handled by financial institutions’ audit departments.14 But bank examiners are still needed to ensure the safety and soundness of financial institutions and their products and services. In fact, the financial crisis of 2007 and legislation such as the Dodd–Frank Wall Street Reform and Consumer Protection Act of 2010 created a need for more examiners and other staff. The Supervision, Regulation, and Credit Department at the Philadelphia Fed is about six times as large as it was in the late 1970s.15

Check Cashing, 9/11, and the Decline of Paper Checks

The Federal Reserve operates a nationwide check-clearing system.16 At one time, the Philadelphia Fed had a large check-processing department.17

After the terrorist attacks of September 11, 2001, planes delivering checks were grounded for several days. A network of trucks was mobilized to transport checks. Working around the clock to clear the backlog, the Philadelphia Fed’s team processed 9.4 million checks each day—almost double the usual amount of 5 million per day.18

In 2004, Congress passed the Check Clearing for the 21st Century Act, which allowed for a digital image of a check to be processed and paid on a same-day basis. As a result, the Fed initiated a multiyear plan to consolidate its check-processing operations,19 and Philadelphia’s checks department dissolved in 2010.

A Key Role for the Fed: Research and Regional Outreach

An important aspect of the Fed’s work is research, data gathering, and outreach. Each Reserve Bank serves as a source for information and expertise on the regional and national economy that policymakers, community and business leaders, and others can use to make informed decisions. Over the years, the focus of research and community programs has shifted to respond to changing needs.

One example is the Philadelphia Fed’s Consumer Finance Institute (CFI). When the Fed was founded, the consumer sector was markedly different from what it is today. Buying items on credit was generally reserved for necessities, people didn’t carry a credit (or debit) card in their wallets to present as payment,20 and student loans as we know them were nonexistent. As these aspects of economic life changed over time, the Philadelphia Fed began to develop expertise in consumer debt, credit, and payment markets. In 2017, the CFI was launched to serve as a resource on this vital aspect of the U.S. economy.

Similarly, the Fed’s priorities around promoting economic inclusion grew out of the Community Reinvestment Act (CRA), passed by Congress in 1977. Designed to combat discriminatory lending practices, the CRA requires banks to lend and invest in the communities they serve. In particular, the CRA was created to address the practice of redlining, which prevented borrowers, specifically communities of color, from obtaining mortgages.

The Philadelphia Fed’s community development department promotes fair access to credit and participation in the economy among groups who have traditionally been left out, including low-income individuals, minorities, and women. It does this through research and programs such as the Economic Growth and Mobility Project, which brings together local partners to tackle issues of economic opportunity in the Third District, and the Reinventing Our Communities Cohort Program, which provides racial equity training to community groups across the U.S. to encourage a strong economy.

The Federal Reserve’s mission to protect the U.S. financial system and economy has not changed. However, as our economy and society continue to evolve, so will the way that the Fed approaches these goals. 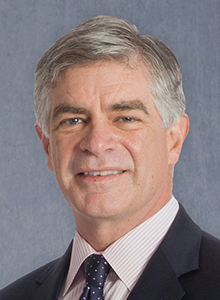