Home > Federal Reserve History > Time Period: Before the Fed > The First Bank of the United States

The First Bank of the United States 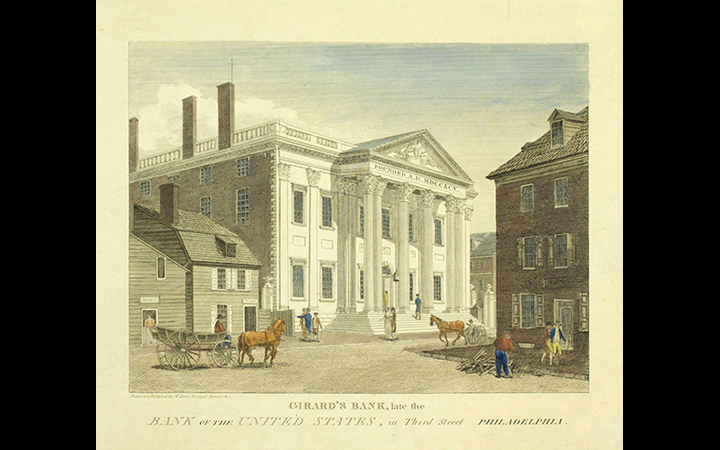 This 1830s painting titled 'Girard's Bank, late the Bank of the United States, in Third Street, Philadelphia' shows the building that housed the First Bank. Image via Library Company of Philadelphia
by Andrew T. Hill, Federal Reserve Bank of Philadelphia

The War for Independence was over, but all was not well. The United States of America, a name the new country had adopted under the Articles of Confederation, was beset with problems. The 1780s saw widespread economic disruption. The new nation’s leaders had their work cut out for them: reestablishing commerce and industry, repaying war debt, restoring the value of the currency, and lowering inflation.

One prominent architect of the fledgling country — Alexander Hamilton, the first secretary of the Treasury under the new Constitution — had ambitious ideas about how to solve some of these problems. One of those was creating a national bank. In December 1790, Hamilton submitted a report to Congress in which he outlined his proposal. Hamilton used the charter of the Bank of England as the basis for his plan. He argued that an American version of this institution could issue paper money (also called banknotes or currency), provide a safe place to keep public funds, offer banking facilities for commercial transactions, and act as the government’s fiscal agent, including collecting the government’s tax revenues and paying the government’s debts.

Not everyone agreed with Hamilton’s plan. Thomas Jefferson was afraid that a national bank would create a financial monopoly that might undermine state banks and adopt policies that favored financiers and merchants, who tended to be creditors, over plantation owners and family farmers, who tended to be debtors. Such an institution clashed with Jefferson’s vision of the United States as a chiefly agrarian society, not one based on banking, commerce, and industry. Jefferson also argued that the Constitution did not grant the government the authority to establish corporations, including a national bank. Despite the opposing voices, Hamilton’s bill cleared both the House and the Senate after much debate. President Washington signed the bill into law in February 1791.

The Bank of the United States, now commonly referred to as the first Bank of the United States, opened for business in Philadelphia on December 12, 1791, with a twenty-year charter. Branches opened in Boston, New York, Charleston, and Baltimore in 1792, followed by branches in Norfolk (1800), Savannah (1802), Washington, D.C. (1802), and New Orleans (1805). The bank was overseen by a board of twenty-five directors. Thomas Willing, who had been president of the Bank of North America, accepted the job as the new national bank’s president.

The Bank of the United States started with capitalization of $10 million, $2 million of which was owned by the government and the remaining $8 million by private investors. The size of its capitalization made the Bank not only the largest financial institution, but the largest corporation of any type in the new nation. The bank’s sale of shares was the largest initial public offering (IPO) in the country to date. Many of the initial investors were foreign, a fact that did not sit well with many Americans, even though the foreign shareholders could not vote. The IPO did not offer shares for immediate delivery but rather subscriptions, or “scrips,” that acted as a down payment on the purchase of bank stock. When the bank subscriptions went on sale in July 1791, they sold so quickly that many would-be investors were left out, prompting fierce bidding in the secondary market for scrips.

Unlike modern central banks, the Bank of the United States did not set monetary policy as we know it today. It did not regulate or act as a lender of last resort for other financial institutions, and it did not hold their reserves. Nonetheless, its prominence as one of the largest corporations in America and its branches’ broad geographic position in the emerging American economy allowed it to conduct a rudimentary monetary policy. The bank’s notes, backed by substantial gold reserves, gave the country a relatively stable national currency. By managing its lending policies and the flow of funds through its accounts, the bank could — and did — alter the supply of money and credit in the economy and hence the level of interest rates charged to borrowers.

These actions, which had effects similar to today’s monetary policy, can be seen most clearly in the Bank’s interactions with state banks. In the course of business, the Bank would accumulate the notes of the state banks and hold them in its vault. When it wanted to slow the growth of money and credit, it would present the notes to banks for collection in gold or silver, thereby reducing state banks’ reserves and putting the brakes on their ability to circulate new banknotes. To speed up the growth of money and credit, the Bank would hold on to the state banks’ notes, thereby increasing state banks’ reserves and allowing those banks to issue more banknotes by making loans.

The Bank’s branches were all located in the fledgling nation’s port cities. This made it easier for the federal government to collect tax revenues, most of which came from customs duties. Locating the branches in ports also made it easier for the Bank to finance international trade and help the Treasury fund the government’s operations through sales of U.S. government securities to foreigners. Furthermore, the Bank’s branch system gave it another advantage: it could move its notes around the country more readily than could a state bank. The Bank’s branches also helped to fund and encourage the country’s westward expansion, particularly with the establishment of a branch in New Orleans.

Although the Bank’s charter did not expire until 1811, discussions about renewing it began much earlier. In 1808, the Bank’s shareholders asked Congress to extend the charter. In March 1809, Secretary of the Treasury Albert Gallatin recommended renewing the Bank’s charter. Congress let the matter languish until January 1810. At that time, the House gave the request for renewal a quick reading but took no action. Finally, in January 1811, both chambers of Congress engaged in a debate on whether to renew. Later that month, the House voted against renewal by just one vote. In February, Gallatin again recommended renewing the Bank’s charter. The Senate vote, however, resulted in a tie. The vice president, George Clinton of New York, cast the tie-breaking vote, and the charter renewal was again defeated by one vote.

By 1811, many of those who had opposed the bank in 1790-91 still opposed it for the same reasons and said the charter should be allowed to expire. By this point, Alexander Hamilton was dead — killed in a duel with Aaron Burr — and his pro-Bank Federalist Party was out of power, while the Democratic-Republican Party was in control. Furthermore, by 1811, the number of state banks had increased greatly, and those financial institutions feared both competition from a national bank and its power.

This article is adapted from the Federal Reserve Bank of Philadelphia’s publication “The First Bank of the United States: A Chapter in the History of Central Banking.” To order print copies of the publication visit https://www.philadelphiafed.org/education/publication-orders

Hammond, Bray. Banks and Politics in America from the Revolution to the Civil War. Princeton: Princeton University Press, 1957.