The Gilded Age in US history spans from roughly the end of the Civil War through the very early 1900s. Mark Twain and Charles Dudley Warner popularized the term, using it as the title of their novel The Gilded Age: A Tale of Today, which satirized an era when economic progress masked social problems and when the siren of financial speculation lured sensible people into financial foolishness. In financial history, the term refers to the era between the passage of the National Banking Acts in 1863-64 and the formation of the Federal Reserve in 1913. In this period, the US monetary and banking system expanded swiftly and seemed set on solid foundations but was repeatedly beset by banking crises.

At the time, like today, New York City was the center of the financial system. Between 1863 and 1913, eight banking panics occurred in the money center of Manhattan. The panics in 1884, 1890, 1899, 1901, and 1908 were confined to New York and nearby cities and states. The panics in 1873, 1893, and 1907 spread throughout the nation. Regional panics also struck the midwestern states of Illinois, Minnesota, and Wisconsin in 1896; the mid-Atlantic states of Pennsylvania and Maryland in 1903; and Chicago in 1905. This essay details the crises in 1873, 1884, 1890, and 1893; this set includes all of the crises that disrupted or threatened to disrupt the national banking and payments system. A companion essay discusses the Panic of 1907, the shock that finally spurred financial and political leaders to consider reforming the monetary system and eventually establish the Federal Reserve.

The Panic of 1873 arose from investments in railroads. Railroads had expanded rapidly in the nineteenth century, and investors in many early projects had earned high returns. As the Gilded Age progressed, investment in railroads continued, but new projects outpaced demand for new capacity, and returns on railroad investments declined. In May and September 1873, stock market crashes in Vienna, Austria, prompted European investors to divest their holdings of American securities, particularly railroad bonds. Their divestment depressed the market, lowered prices on stocks and bonds, and impeded financing for railroad firms. Without cash to finance operations and refinance debts that came due, many railroad firms failed. Others defaulted on payments due to banks. This turmoil forced Jay Cooke and Co., a notable merchant bank, into bankruptcy on September 18. The bank was heavily invested in railroads, particularly Northern Pacific Railway. 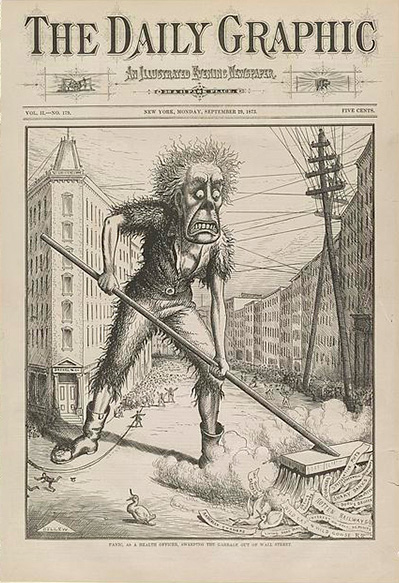 Cooke’s failure changed expectations. Creditors lost confidence in railroads and in the banks that financed them. Stock markets collapsed. On September 20, for the first time in its history, the New York Stock Exchange closed. Trading did not resume for ten days. The panic spread to financial institutions in Washington, DC, Pennsylvania, New York, Virginia, and Georgia, as well as to banks in the Midwest, including Indiana, Illinois, and Ohio. Nationwide, at least one-hundred banks failed.

Initially, the New York Clearing House mobilized member reserves to meet demands for cash. On September 24, however, it suspended cash payments in New York. New York’s money center banks continued to supply cash to country banks. Those banks fulfilled withdrawal requests by drawing down reserves at banks in New York and in other reserve cities, which were municipalities whose banks could hold as deposits the legally required cash reserves of banks in other locations. The crisis subsided in mid-October.

The Panic of 1884, by contrast, had a more limited impact. It began with a small number of financial firms in New York City. In May 1884, two firms – the Marine National Bank and the brokerage firm Grant and Ward – failed when their owners’ speculative investments lost value. Soon after, the Second National Bank suffered a run after it was revealed that the president had embezzled $3 million and fled to Canada. Then, the Metropolitan National Bank was forced to close after a run was sparked by rumors that its president was speculating on railroad securities with money borrowed from the bank (those allegations later proved to be untrue). 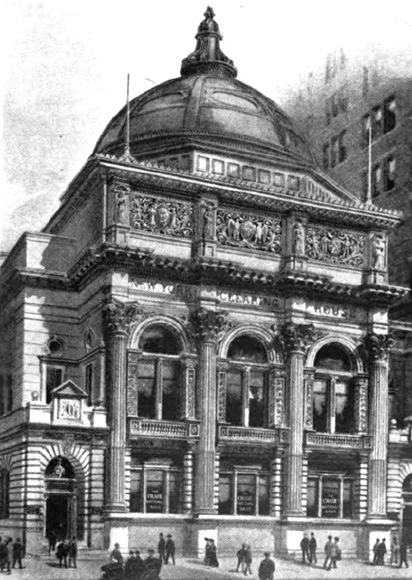 The latter institution had financial ties to numerous banks in neighboring states, and its closure raised doubts about the banks to which it was linked. The crisis spread through Metropolitan’s network to institutions in New Jersey and Pennsylvania, but the crisis was quickly contained. The New York Clearing House audited Metropolitan, determined it was solvent, advertised this fact, and loaned Metropolitan $3 million so that it could withstand the run. These actions reassured the public, and the panic subsided.

The Panic of 1890 was also limited in scope. In November, after the failure of the brokerage firm Decker, Howell and Co., securities’ prices plunged. The firm’s failure threatened its bank, the Bank of North America. Depositors feared the bank would fail and began withdrawing substantial sums. Troubles began to spread to other institutions, including brokerage firms in Philadelphia and Richmond. Financier J.P. Morgan then convinced a consortium of nine New York City banks to extend aid to the Bank of North America. This action restored faith in the bank and the market, and the crisis abated.

The Panic of 1893 was one of the most severe financial crises in the history of the United States. The crisis started with banks in the interior of the country. Instability arose for two key reasons. First, gold reserves maintained by the US Treasury fell to about $100 million from $190 million in 1890. At the time, the United States was on the gold standard, which meant that notes issued by the Treasury could be redeemed for a fixed amount of gold. The falling gold reserves raised concerns at home and abroad that the United States might be forced to suspend the convertibility of notes, which may have prompted depositors to withdraw bank notes and convert their wealth into gold. The second source of this instability was that economic activity slowed prior to the panic. The recession raised rates of defaults on loans, which weakened banks’ balance sheets. Fearing for the safety of their deposits, men and women began to withdraw funds from banks. Fear spread and withdrawals accelerated, leading to widespread runs on banks. 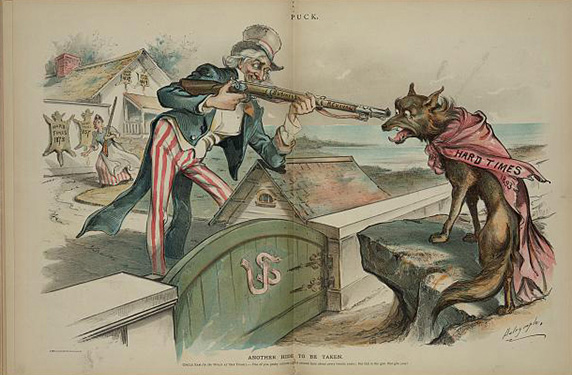 In June, bank runs swept through midwestern and western cities such as Chicago and Los Angeles. More than one-hundred banks suspended operations. From mid-July to mid-August, the panic intensified, with 340 banks suspending operations. As these banks came under pressure, they withdrew funds that they kept on deposit in banks in New York City. Those banks soon felt strained. To satisfy withdrawal requests, money center banks began selling assets. During the fire sale, asset prices plummeted, which threatened the solvency of the entire banking system. In early August, New York banks sought to save themselves by slowing the outflow of currency to the rest of the country. The result was that in the interior local banks were unable to meet currency demand, and many failed. Commerce and industry contracted. In many places, individuals, firms, and financial institutions began to use temporary expediencies, such as scrip or clearing-house certificates, to make payments when the banking system failed to function effectively.

In the fall, the banking panic ended. Gold inflows from Europe lowered interest rates. Banks resumed operations. Cash and credit resumed lubricating the wheels of commerce and industry. Nevertheless, the economy remained in recession until the following summer. According to estimates by Andrew Jalil and Charles Hoffman, industrial production fell by 15.3 percent between 1892 and 1894, and unemployment rose to between 17 and 19 percent.1 After a brief pause, the economy slumped into recession again in late 1895 and did not fully recover until mid-1897.

While the narrative of each panic revolves around unique individuals and firms, the panics had common causes and similar consequences. Panics tended to occur in the fall, when the banking system was under the greatest strain. Farmers needed currency to bring their crops to market, and the holiday season increased demands for currency and credit. Under the National Banking System, the supply of currency could not respond quickly to an increase in demand, so the price of currency rose instead. That price is known as the interest rate. Increasing interest rates lowered the value of banks’ assets, making it more difficult for them to repay depositors and pushing them toward insolvency. At these times, uncertainty about banks’ health and fear that other depositors might withdraw first sometimes triggered panics, when large numbers of depositors simultaneously ran to their banks and withdrew their deposits. A wave of panics could force banks to sell even more assets, further depressing asset prices, further weakening banks’ balance sheets, and further increasing the public’s unease about banks. This dynamic could, in turn, trigger more runs in a chain reaction that threatened the entire financial system.

In 1884 and 1890, the New York Clearing House stopped the chain reaction by pooling the reserves of its member banks and providing credit to institutions beset by runs, effectively acting as “a central bank with reserve power greater than that of any European central bank,”2 in the words of scholar Elmus Wicker.

A common result of all of these panics was that they severely disrupted industry and commerce, even after they ended. The Panic of 1873 was blamed for setting off the economic depression that lasted from 1873 to 1879. This period was called the Great Depression, until the even greater depression of 1893 received that label, which it held until the even greater contraction in the 1930s -- now known as the Great Depression.

Another common result of these panics was soul searching about ways to reform the financial system. Rumination regarding reform was particularly prolific during the last two decades of the Gilded Age, which coincided with the Progressive Era of American politics. Following the Panic of 1893, for example, the American Bankers Association, secretary of Treasury, and comptroller of currency all proposed reform legislation. Congress held hearings on these proposals but took no action. Over the next fourteen years, politicians, bureaucrats, bankers, and businessmen repeatedly proposed additional reforms (see Wicker, 2005, for a summary), but prior to the Panic of 1907, no substantial reforms occurred.

The adjective “gilded” means covered with a thin gold veneer on the outside but not golden on the inside. In some ways, this definition fits the nineteenth century banking and monetary system. The gold standard and other institutions of that system promised efficiency and stability. The American economy grew rapidly. The United States experienced among the world’s fastest growth rates of income per capita. But, the growth of the nation’s wealth obscured to some extent social and financial problems, such as periodic panics and depressions. At the time, academics, businessmen, policymakers, and politicians debated the benefits and costs of our banking system and how it contributed to national prosperity and instability. Those debates culminated in the Aldrich-Vreeland Act of 1908, which established the National Monetary Commission and tasked it to study these issues and recommend reforms. The commission’s recommendations led to the creation of the Federal Reserve System in 1913.

Grossman, Richard S. “The Macroeconomic Consequences of Bank Failures under the National Banking System.” Explorations in Economic History 30, no. 3 (1993): 294-320.