A close connection existed between the principal banking acts passed during 1932: the Reconstruction Finance Corporation Act, signed by Herbert Hoover on January 22, subtitled an act …

and the Banking Act of 1932, signed by Herbert Hoover on February 27, subtitled an act …

“to improve the facilities of the Federal reserve system for the service of commerce, industry, and agriculture, to provide means for meeting the needs of member banks in exceptional circumstances … .”

The acts responded to concerns about the structure and mission of the Federal Reserve that arose during the economic contraction of the early 1930s.

Congress gave the Federal Reserve multiple missions. One was to act as a lender of last resort, which would extend loans to banks during financial panics. Another included providing an elastic currency. Congress also intended for the Federal Reserve to carry out its mission in a manner consistent with the maintenance of the gold standard. The Federal Reserve’s leaders disagreed on how to prioritize those missions and the appropriate response to the economic contraction of the early 1930s. The twelve Federal Reserve banks could not agree on a course of action and lacked some legal powers that would have enabled them to act more effectively. The Federal Reserve Board in Washington, DC, lacked the authority to dictate nationwide policies, the power to act on its own, and a clear vision about how to counteract the depression, even if it had the power to act. 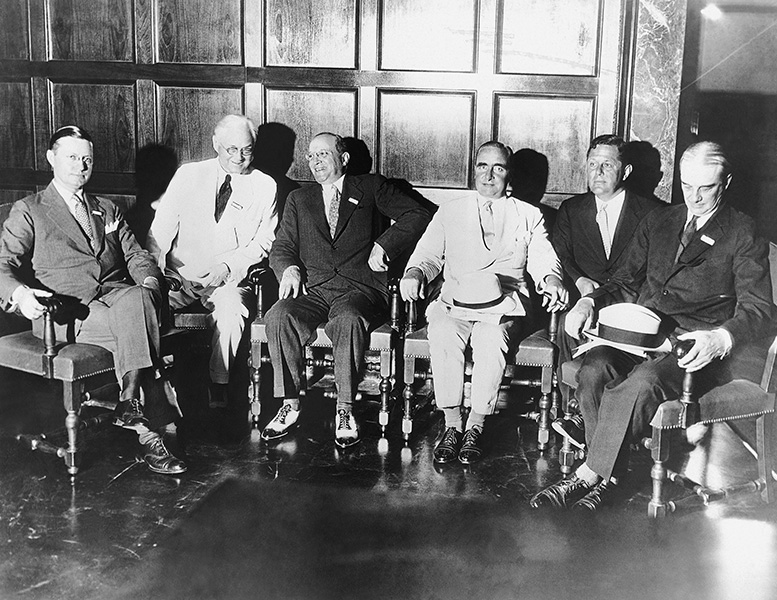 The Reconstruction Finance Corporation Act was one solution to this problem. The act established a new government-sponsored financial institution to lend to member banks on types of collateral not eligible for loans from the Federal Reserve and to lend directly to banks and other financial institutions without access to Federal Reserve credit facilities. “Almost from the time he became Governor of the Federal Reserve Board in September 1930, Eugene Meyer had urged President Hoover to establish” a Reconstruction Finance Corporation (RFC) modeled on the “War Finance Corporation, which Meyer had headed during World War 1” (Chandler 1971, 180). Meyer told the New York Times that the RFC “would be a strong influence in restoring confidence throughout the nation and in helping banks to resume their normal functions by relieving them of frozen assets (New York Times 1932).”

The RFC was authorized to extend loans to all financial institutions in the United States and to accept as collateral any asset the RFC’s leaders deemed acceptable. The RFC’s mandate emphasized loaning funds to solvent but illiquid institutions whose assets appeared to have sufficient long-term value to pay all creditors but in the short run could not be sold at a price high enough to repay current obligations. The RFC also loaned funds to the receivers of banks in liquidation enabling receivers to repay depositors as soon as possible; Federal Land Banks, which financed farm mortgages; and Federal Intermediate Credit Banks, which financed crops in production; insurance companies; and railroads.

On July 21, 1932, an amendment authorized the RFC to loan funds to state and municipal governments. The loans could finance infrastructure projects, such as the construction of dams and bridges, whose construction costs would be repaid by user fees and tolls. The loans could also fund relief for the unemployed, as long as repayment was guaranteed by tax receipts.

In retrospect, scholars see the Reconstruction Finance Corporation as a limited success. While estimates vary, statistical analysis shows that RFC loans led, on average, to better outcomes for banks and firms (Butkiewicz 1995; Mason 2001; Mason 2003), but not all of the banks and firms that received RFC support survived the Depression.

Like the RFC, the Banking Act of 1932 reformed the Federal Reserve’s role providing credit during economic downturns.2  The act included two principal provisions. One, the Reserve banks received authority to lend to member banks on assets not otherwise eligible for discount, with the approval of five members of the Federal Reserve Board and at an interest rate at least one-half of 1 percent higher than the highest regular discount rate in effect at that Reserve bank. Two, the Reserve banks received authority to use government securities as collateral for Federal Reserve notes in addition to gold and commercial paper, which were the types of collateral authorized by the Federal Reserve Act. Both provisions expired after one year, although subsequent legislation extended these temporary provisions, which eventually became permanent.

Meyer and Harrison met with bankers in New York and Chicago to discuss these issues and gain their support. Then, the pair approached the Hoover administration and Congress. Sen. Carter Glass initially opposed the legislation, because it conflicted with his commercial loan theory of money creation, but after discussions with the president, secretary of treasury, and others, eventually agreed to co-sponsor the act. About these discussions, Herbert Hoover wrote,

A funny thing about this act is that though its purpose was to avoid imminent disaster, the economy being by now in a state of collapse, the objection was raised that it would be inflationary. This was as if a doctor with a dying patient on his hands should refrain from giving him proper treatment for fear if he got well he might do something foolish. Senator Glass had this fear and was zealous to prune back the “inflationary” possibilities of the measure (Hoover 1952, 117).

Within a few days of the passage of the act, the Federal Reserve unleashed an expansionary program that was, at that time, of unprecedented scale and scope. The Federal Reserve System bought nearly $25 million in government securities each week in March and nearly $100 million each week in April. By June, the System had purchased over $1 billion in government securities. These purchases offset huge flows of gold to Europe and hoarding of currency by the public, so that in summer of 1932 deflation ceased. Prices of commodities and securities had begun to return to pre-depression levels. Industrial production had begun to recover. The economy appeared headed in the right direction (Chandler 1971; Friedman and Schwartz 1963; Meltzer 2003).

In the summer of 1932, however, the Federal Reserve discontinued its expansionary policies and ceased purchasing substantial quantities of government securities. “It seems likely that had the purchases continued, the collapse of the monetary system during the winter of 1933 might have been avoided” (Meltzer 2003, 372-3).