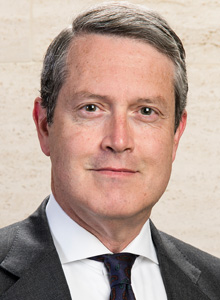 Randal Quarles took office as a member of the Board of Governors of the Federal Reserve System in October 2017, filling an unexpired term that ended in January 2018. He was reappointed to the Board in July 2018 for a term ending January 31, 2032. He was also sworn in as Vice Chair for Supervision in October 2017 and his term for that position ended on October 13, 2021. He resigned December 25, 2021.

Prior to his appointment to the Board, Quarles was founder and managing director of the Cynosure Group, a Utah-based investment firm. Before founding that firm, he was a partner at The Carlyle Group, a private equity firm based in Washington, D.C. Quarles served as undersecretary for domestic finance at the Department of the Treasury from September 2005 to November 2006 and assistant secretary for international affairs from April 2002 to August 2005. During this tenure, Quarles served as policy chair of the Committee on Foreign Investment in the United States. Prior to joining the Department of the Treasury, he was the U.S. Executive Director of the International Monetary Fund from August 2001 to April 2002. From January 1991 to January 1993, Quarles served as a special assistant to the Secretary of the Treasury for Banking Legislation and as deputy assistant secretary of the Treasury for financial institutions. Prior to, and in between, his service at the Department of the Treasury, he was a partner at Davis, Polk & Wardwell, serving in their New York and London offices.

While Vice Chair for Supervision, Quarles was appointed chair of the Financial Stability Board, an international body that monitors and makes recommendations about the global financial system. He served a three-year term ending in December 2021.

Written by the Board of Governors of the Federal Reserve System and updated January 2022. See disclaimer.