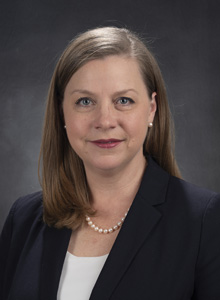 Prior to her appointment to the Board, Bowman served as the state bank commissioner of Kansas from January 2017 to November 2018. She also served as vice president of Farmers & Drovers Bank in Kansas from 2010 to 2017.

In addition to her experience in the banking industry, Bowman worked in Washington, D.C., for Sen. Bob Dole of Kansas from 1995 to 1996 and served as a counsel to the U.S. House Committee on Transportation and Infrastructure and the Committee on Government Reform and Oversight between 1997 and 2002. In 2002, she became director of congressional and intergovernmental affairs at the Federal Emergency Management Agency. From 2003 to 2004, she served as deputy assistant secretary and policy advisor to Homeland Security Secretary Tom Ridge.

Following her time in the federal government, Bowman led a government and public affairs consultancy based in London before returning to Kansas in 2010.

Bowman received a bachelor’s degree in advertising and journalism from the University of Kansas and a law degree from Washburn University. She is a member of the New York State Bar.