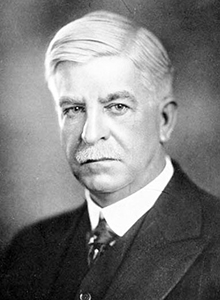 Maximilian B. Wellborn was the second governor of the Federal Reserve Bank of Atlanta. He served in that position from March 1, 1919, to January 1, 1928.

Wellborn was born in Lewisville, Arkansas, in 1862 and raised in Eufaula, Alabama. After high school, Wellborn worked as a clerk in various offices in Alabama and Mississippi. He worked in real estate and insurance in Alabama, then organized City National Bank in Anniston and the Anniston Building and Loan Association in 1887.

Wellborn became the first chairman of the board and Federal Reserve agent at the Atlanta Fed in August 1914. He helped prepare for the Bank’s opening on November 16, 1914. At the time, the chairman presided over district board meetings, issued annual reports and, in his role as Federal Reserve agent, was the Board of Governors’ representative in Atlanta. On March 1, 1919, Wellborn switched positions with Joseph A. McCord, the Bank’s first governor. The governor supervised the day-to-day operations of the Bank, and the position is equivalent to the president today.

During Wellborn’s tenure as governor, the economy suffered aftershocks from World War I, including rising prices due to postwar inflation and the subsequent price crash. In the Southeast, the fluctuation of the price of cotton was especially troublesome. Wellborn pulled resources not only from the Atlanta Fed but also from the Cleveland Fed to be able to lend money to member banks affected.

During Wellborn’s time, monetary policy decisions were often made autonomously at district banks. It was not until 1935 that the Federal Open Market Committee (FOMC) was created and monetary policy was conducted on a national level. In his handling of the Panic of 1920, Wellborn applied liberal policies that were later acknowledged by Governor Crissinger at the Board of Governors as the right prescription.

Wellborn resigned as governor on January 1, 1928, to return to his farm near Piedmont, Alabama. In 1932, at the age of seventy, he was elected to the Alabama State Senate and served two terms.

Wellborn passed away in 1957 at the age of ninety-five.