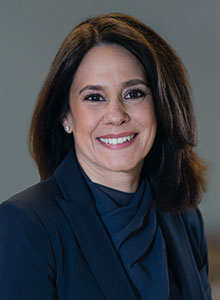 Lorie K. Logan began serving as the 14th president and CEO of the Federal Reserve Bank of Dallas on August 22, 2022.

Logan previously was manager of the System Open Market Account for the FOMC and an executive vice president of the Federal Reserve Bank of New York. In that role, she managed the Federal Reserve’s securities portfolio as it grew to more than $8 trillion and led the implementation of monetary policy as directed by the FOMC. She also oversaw provision of fiscal agent services to the U.S. Treasury Department, analysis of global financial market developments and production of reference rates, including the new Secured Overnight Financing Rate.

She represented the Federal Reserve on the Markets Committee at the Bank for International Settlements and oversaw several public-private sector committees sponsored by the New York Fed to engage with market participants on key issues and advance financial industry best practices.

Logan played a crucial role in the development and implementation of the Federal Reserve's actions in response to the COVID-19 pandemic. This included designing and managing several facilities to support market functioning and the flow of credit to households and businesses. She drew on her experience during the Global Financial Crisis, when she was a prominent leader in the expansion of the Federal Reserve's balance sheet and the creation of liquidity facilities to mitigate systemic risks to the financial system.

She is a native of Versailles, Kentucky, and holds a bachelor's degree in political science from Davidson College and a master's degree in public administration from Columbia University.