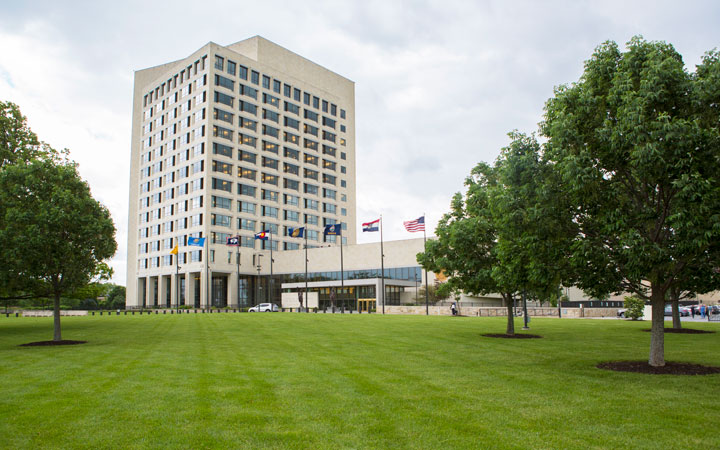 In 2008, the Kansas City Fed moved from its long-time home at 925 Grand Boulevard to its current headquarters at One Memorial Drive. The 600,000-square-foot facility sits near Kansas City’s historic Union Hill area and occupies a prominent hillside just south of the National World War I Museum and Memorial that once was the site of St. Mary’s Hospital. The headquarters building and grounds are bounded by Main Street to the east and Penn Valley Park to the west.

The building was designed by Henry N. Cobb, one of the founding principles of the New York City architectural ﬁrm Pei Cobb Freed & Partners. The limestone-clad tower comprises 12 oﬃce ﬂoors above a two-story base containing space open to the public and guests, and room for operational activities.

The public can enter the building on the ﬁrst ﬂoor, which houses a cash-processing area and vault; the Money Museum, a 3,000-square-foot, hands-on exhibit space; and a theater where visitors can watch a short ﬁlm about the Federal Reserve. The Tenth District has a second Money Museum in its Denver Branch.

The Omaha Branch opened on Sept. 4, 1917, as the first Branch office of the Federal Reserve Bank of Kansas City. Since then, the Omaha Branch has given Nebraskans a local connection to the nation's central bank through its participation in each of the Fed's mission areas, including financial services, the regulation and supervision of financial institutions, and monetary policy.

The Denver Branch is Colorado, Wyoming and northern New Mexico’s connection to the nation’s central bank through relationships with local staff who have insight into regional needs, economies and challenges. The Denver Branch has about 175 employees and is located on the 16th Street Mall in downtown Denver. The Denver Branch opened its doors on January 14, 1918.

To foster the open discussion that the symposium is known for, attendees are selected based on each year’s topic with consideration for diversity in region, background and industry. In a typical year about 120 people attend consisting of the following groups. View past attendees.

Similarly, although the Bank receives numerous requests from media outlets worldwide, press attendance is also limited to a group that is selected to provide important transparency to the symposium, but yet not overwhelm or influence the proceedings. All symposium participants, including members of the press, pay a fee to attend. The fees are then used to recover event expenses.

The goal of the Economic Policy Symposium when it began was to provide a vehicle for promoting public discussion and exchanging ideas. Throughout the event’s history in Jackson Hole, attendees from 70 countries have gathered to share their diverse perspectives and experiences.

Robert L. Owen was a Senator from Oklahoma who co-sponsored the Federal Reserve Act with Rep. Carter Glass of Virginia. Together, the two steered the legislation to final approval and President Woodrow Wilson’s signature in December 1913.

Owen was born in Lynchburg, Virginia, in 1856, to Robert Owen, president of the Virginia and Tennessee Railway, and Narcissa Clark Chisholm. As a ten-year-old, Owen attended school near Baltimore and later graduated from Washington and Lee University with honors and a master’s degree in 1877.

The family’s fortune was lost to unexplained circumstances, likely related to the Civil War and reconstruction. The loss, and the death of his father, forced Owen and his mother, who was of Native American descent, to move to the Indian Territory, where they were entitled to tribal property.

While living in what later became Oklahoma, Owen briefly taught school at the Cherokee Orphan Asylum before studying law and gaining admittance to the bar in 1880. In 1885, he was appointed head of the United States Union Agency for the Five Civilized Tribes.

Owen owned and edited a newspaper in Vinita, Oklahoma, and in 1890 established the First National Bank of Muskogee, where he served as president until 1900.

In 1893, Owen witnessed the events that culminated in the banking panic that year. Owen wrote in a 1919 memoir, “This bank, like many other banks, lost 50 percent of its deposits within as many days because of the panic, which frightened people and caused them to withdraw their funds for hoarding throughout the United States.”

The panic, Owen wrote, “demonstrated the complete instability of the financial system of America and the hazards which businessmen had to meet under a grossly defective banking system.”

Owen was a leader in the direct election of senators and the Child Labor Act, among other issues. The highlight of his Senate career, however, arguably was his involvement with the Federal Reserve Act.

“The whole country owes you a debt of gratitude and admiration,” Wilson wrote to Owen. “It has been a pleasure to be associated with you in so great a piece of constructive legislation.”

After retiring from the Senate in 1925, Owen practiced law in Washington, DC, but devoted much of his time to promoting an international alphabet that he hoped would make English a universal language. The system, which was inspired by an eighty-five-character alphabet created by the Cherokee Chief Sequoia in 1823, was unsuccessful, but it received a significant amount of media attention.

While establishing the Federal Reserve may have been Owen’s greatest accomplishment, much of the credit went to co-sponsor Carter Glass.

In later years, “Glass and Owen squabbled with each other very bitterly” about who was the principal author of the Federal Reserve Act, says Dr. Kenny L. Brown, chair of the department of history and geography at the University of Central Oklahoma and a leading expert on Owen.

According to Brown, Owen and Glass finally resolved their differences after Owen penned a letter to Glass saying that it was time for the dispute to end and noting that both men were raised only a few blocks apart in the same childhood hometown of Lynchburg, Virginia.

After the death of his wife, Daisy Hester, in 1946, Owen lived the final months of his life alone in an apartment near Washington’s Meridian Hill Park. After being hospitalized for several weeks with an illness and undergoing an operation, he died in 1947 at the age of ninety-one. Today, Owen and Glass are both buried in Lynchburg’s Spring Hill Cemetery.

The Bank hosts an annual Agricultural Symposium to explore topics of current and emerging significance to agriculture.

The Federal Reserve Banks of Kansas City and Dallas began hosting a joint energy conference in 2016, which focuses on the key drivers of oil and gas and their implications for the energy industry, the financial sector and the broader economy. The conference takes place in Tenth and Eleventh District cities with strong energy economies, such as Houston, Oklahoma City and Dallas. Participants are typically business leaders, central bankers, government officials, academics and financial market representatives.