Congress enacted the Community Reinvestment Act (CRA) in 1977 to encourage banks and thrift institutions to “serve the convenience and needs of the communities in which they are chartered to do business,” including low- and moderate-income (LMI) communities, and to do so in a manner “consistent with the safe and sound operation of such institutions.” The CRA requires each federal bank regulator, including the Federal Reserve, to evaluate the extent to which banks address the credit needs of LMI neighborhoods in their geographic markets. While research generally indicates the CRA has increased lending to LMI communities, the Act has been a source of debate since its passage.

Historical Context for the CRA

Before the CRA, many banks did not market their lending products and financial services to LMI neighborhoods. This practice was known as “redlining,” a term many people attribute to the color-coded maps developed by the New Deal-era Home Owners’ Loan Corporation (HOLC).1  The agency was established in 1933 to exchange foreclosed mortgages from struggling banks for guaranteed government bonds, and refinance the foreclosed borrowers directly. To gauge the relative risk of areas where HOLC lent, the agency graded neighborhoods on a four-point scale from A to D, where D neighborhoods were deemed “hazardous.” By definition, hazardous areas -- delineated in red -- had a large minority population, poorer households, and older housing stock. 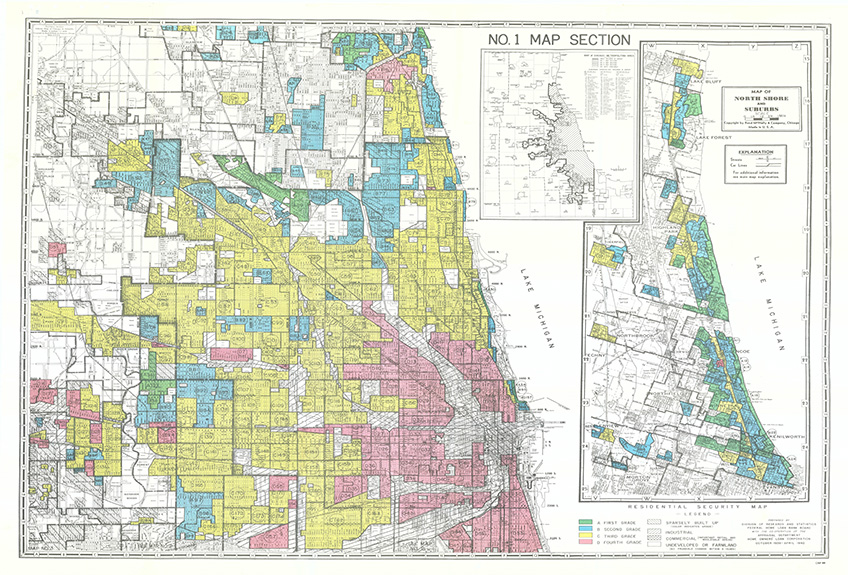 Other Depression-era policies helped to entrench redlining. The National Housing Act of 1934 created the Federal Housing Administration (FHA) to provide government-funded insurance on mortgages originated by banks. But the FHA would not insure loans for homes in neighborhoods with “incompatible” or “undesirable” racial or ethnic groups. It also would not insure loans for older homes, which further discriminated against minority borrowers since racial deed covenants prohibited them from moving into newer neighborhoods. Banks were reluctant to issue loans without FHA insurance, since eligibility for federal deposit insurance (introduced with the creation of the Federal Deposit Insurance Corporation in 1933) required banks to engage in safe and sound lending practices. In 1938, the Federal National Mortgage Association was created to purchase and securitize FHA-insured mortgages exclusively, creating a further incentive for banks to eschew mortgage lending in any area where FHA insurance was unavailable.

The Supreme Court struck down states’ rights to enforce explicit racial deed covenants in 1948, and the Fair Housing Act of 1968 (FHA, amended in 1974 and 1988) prohibited housing discrimination on the basis of race, color, national origin, or religion.2  But discriminatory lending and housing practices persisted, spurring civil rights groups to advocate for additional legislation. In 1974, Congress passed the Equal Credit Opportunity Act (ECOA, amended in 1976) which prohibited discrimination on the basis of race or color, religion, national origin, sex, marital status, or age, among other factors.3  These rules helped to curtail illegal redlining where lenders, intentionally or otherwise, provided unequal access to credit based on personal characteristics rather than creditworthiness.

The Push for Further Legislation

Even with the FHA and ECOA, observers argued that redlining continued in LMI areas, and there is some evidence that overt discrimination in mortgage lending persisted (Ladd 1998). Community groups in Chicago, headed by the National Training and Information Center (now National People’s Action), led the movement to change lending practices. In 1974, Illinois became the first state to pass a law requiring banks to disclose their lending practices and prohibiting redlining, and several other states soon followed suit. The next year, Congress passed the Home Mortgage Disclosure Act, which required banks to disclose the location of the property financed and the race and gender of borrowers, among other provisions.

In addition to discrimination, others factors inhibiting lending in LMI neighborhoods included a shortage of data on appraisals and credit histories of LMI borrowers. This information gap created a “first mover” problem; the first bank to enter an underserved market had the arduous task of measuring and pricing both collateral and borrower risks. Once documented, however, these data become available at low cost to later market entrants, which meant banks had little incentive to be the first into an LMI market (Bernanke 2007; Haltom 2010).

Many lawmakers also believed that the benefits afforded banks, such as deposit insurance and access to the Fed’s discount window, conferred certain obligations (Braunstein 2008). As Sen. William Proxmire (D-WI) stated when he introduced the CRA to the Senate in January 1977, “a public charter conveys numerous economic benefits and in return it is legitimate for public policy and regulatory practice to require some public purpose." 4

The proposed law was the subject of heated debate. Proponents believed banks were foregoing profitable lending opportunities in LMI neighborhoods, and that legislation was necessary to curb the “first mover” problem. Critics were concerned the law would create distortions in credit markets and result in credit allocation by the federal bank regulators. They also noted an already heavy regulatory burden, and felt the CRA would encourage riskier lending.

The final bill, signed by President Carter in October 1977, directed the federal regulatory agencies to “(1) assess the institution’s record of meeting the credit needs of its entire community, including low- and moderate-income neighborhoods, consistent with the safe and sound operation of such institution; and (2) take such record into account in its evaluation of an application for a deposit facility by such institution.” In an effort to address concerns about credit allocation, the bill was intentionally vague about the standards regulators should use in their evaluations.

To implement the Act, the regulatory agencies originally developed 12 assessment criteria to evaluate how banks ascertained and responded to the credit needs of their communities, and assigned banks a rating based on how they met these criteria. Regulators took (and still do take) these ratings into account when deciding whether to approve mergers, acquisitions, or the opening of new branches. The original criteria were qualitative and focused primarily on the lending process, rather than on lending outcomes, which may have limited the Act’s impact initially (Avery, Calem, and Canner 2003).

Changes have been made to the CRA in response to complaints from both activists and bankers. In 1989, the Financial Institutions Reform, Recovery and Enforcement Act required regulators to publicly disclose banks’ CRA ratings and evaluations. In 1993, President Clinton directed regulators to review and revise the regulation to address concerns about the perceived costs of compliance and its emphasis on process over outcomes. The new CRA rule, adopted in 1995, streamlined the review process for small banks (assets under $250 million) and established new criteria to assess performance in lending, investments, and services in LMI communities.5  Other legislative and regulatory changes also have been enacted over the years.6

The CRA also gave rise to the Fed’s Community Development function. Initially, community groups needed help navigating the administrative process of filing a protest if they believed a bank’s practices had discriminatory effects. In response, some Reserve Banks set up functions, separate from the supervisory function, to provide guidance and advice to community groups. The Board issued a letter asking every Reserve Bank to set up a similar group, which each one did by 1981. Community Affairs, as it was then called, evolved during the following years, as community groups became more skilled at navigating the protest process on their own. Concurrently, banks and community groups were increasingly seeking each other out: Banks were looking for community investment opportunities, and community groups were looking for funding. So the community affairs role shifted toward facilitating relationship building to address economic challenges in low- and moderate-income communities.

The Impact and Future of the CRA

A large body of research has attempted to determine the CRA’s impact on banks’ lending practices, profitability and risk profiles. In general, the evidence suggests the CRA has increased lending to LMI communities, although the magnitude is a matter of debate and it is difficult to disentangle the effects of the CRA from the effects of other regulatory and market changes.7  In addition, it remains an open question whether or not banks were actually foregoing profit by failing to make profitable loans in LMI neighborhoods (Lacy and Walter 2002). Some research has found that CRA-related lending is at least marginally profitable, although other research suggests the CRA has had little effect on bank profitability, either positive or negative (Avery, Calem and Canner 2003; Bernanke 2007).

Following the financial crisis of 2007-08, some critics of the CRA argued it had contributed to the mortgage crisis by encouraging banks to make loans to riskier borrowers. There is some evidence that CRA lending standards were relaxed in the mid-1990s; however, the bulk of defaulted mortgages during the foreclosure crisis were originated between 2004 and 2007. In addition, many of those loans were issued by mortgage lenders not subject to the CRA. Overall, the available evidence suggests the CRA was not responsible for the subprime crisis (Haltom 2010).

Today, some observers question if the CRA is still necessary. Proponents of the CRA maintain that, while overt discrimination is not common, redlining now takes more subtle forms, such as limited marketing in LMI areas, (new) branch locations away from LMI areas, and service fee structures that favor higher income consumers. Opponents argue that technology and credit-scoring have significantly reduced the market frictions that existed at the time the CRA was passed. Also, the CRA uses the location of actual bank buildings to determine assessment areas, but these areas might be less suitable as mobile banking makes it increasingly possible for bank customers to reside far from a branch location. The efficacy and necessity of the CRA will continue to be a matter of debate for community stakeholders, bankers, and policymakers.

Avery, Robert B., Paul S. Calem, and Glenn B. Canner. “The Effects of the Community Reinvestment Act on Local Communities.” Paper prepared for the Federal Reserve System Conference Sustainable Community Development: What Works, What Doesn’t, and Why. March 20, 2003.

Dennis, Warren L. “The Community Re-investment Act of 1977: Its Legislative History and Its Impact on Applications for Changes in Structure Made by Depository Institutions to the Four Federal Financial Supervisory Agencies.” Purdue University Credit Research Center Working Paper no. 24, 1978.